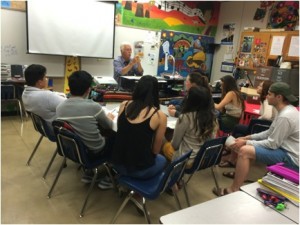 Students in Señora Alicia Newton-Hamill’s Spanish 5/IB class had a special visitor on their last day. After completing a unit on Mexican Muralism and the Chicano Muralist movement, students had a final speech to present, signed the mural that they designed and painted on the classroom wall, and then celebrated with cake. This year, however, Sophia Delap, an IHS student in the class, asked her grandfather to visit. Stan Padilla, nationally recognized muralist and educator, came to see his granddaughter’s work, and gave an inspiring and informational talk as well. He discussed his role and continued involvement in The Royal Chicano Art Force, his friendship with United Farm Worker and human rights activist Dolores Huerta, as well as his work with the Yaqui Nation. Sitting in front of the class, Mr. Padilla also discussed his recent projects as well as his upcoming commissions. “His visit was a highlight of my teaching career,” said Señora Newton-Hamill. “Being able to hear an artist with his experience, dedication, and historical perspective was very special for all of us.” The students, after listening closely to Mr. Padilla’s words, posed for a picture in front of their mural. It was a good day in class. 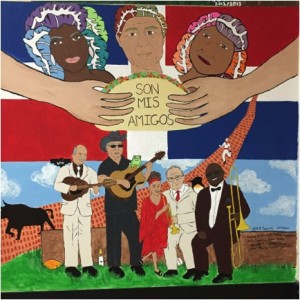 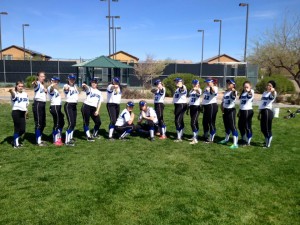 CHS Softball moves on to State Championship Playoff Game, this Saturday in Corvallis!!  SO PROUD of these young student-athletes!!  #Lancers #CHSSOFTBALL